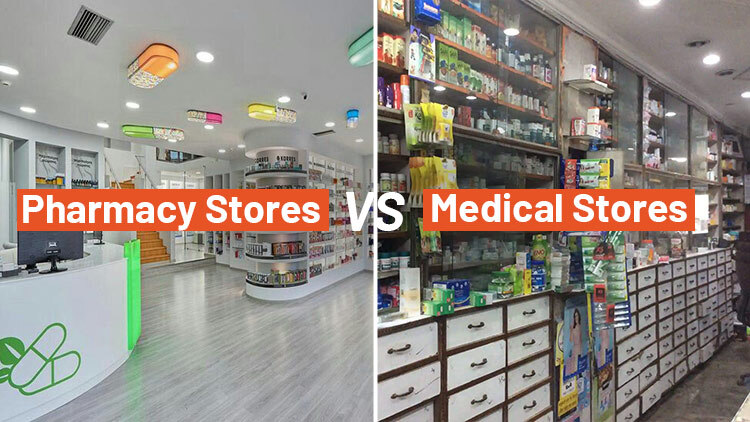 What is the Difference Between Pharmacy and Medical Stores?

When you want to buy medicines, you will think of going to a pharmacy or a medical store. What is the difference between these two? People always use these words interchangeably about these two types of health care stores. In this article, we will describe the difference between different terminologies used in the Indian Pharmaceutical sector.

In medical shops, you can only buy over-the-counter (OTC) products; in pharmacies, you can buy other medicines by providing a prescription. In India, there is no clear difference between pharmacy and medical stores. They are used interchangeably by the consumers. A pharmacy store seems to be more standard term than a medical shop.

However, if you want to open a medical store or a pharmacy store, It is very important to know the difference between different terminology. You will end up getting a specific type of medical store licence based on your type of store.

According to the Drug and Cosmetic Act, these words can be displayed if the following conditions are met:

Drug Store
Licences obtained by medical stores that do not need the services of a qualified person will be able to display the description “Drugstore.”

Pharmacy/Pharmacist/Dispensing Chemist
Licences obtained by medical stores that require the services of a Registered Pharmacist and maintain a “Pharmacy” for compounding against prescriptions can display the description of “Pharmacy,” “Pharmacist,” “Dispensing Chemist,” or “Pharmaceutical Chemist.

Pharmacy and Druggist/Chemist are medical retail shops that deal in the sale of medicines, but a pharmacist is a person who supervises and directs all operations of a pharmacy.

Rules and regulation change in 2019

‘Pharmacy’ term to be used in place of ‘chemists & druggists’

The Drug and Technical Advisory Board has approved a proposal to amend the Drugs and Cosmetics Rules to bring uniformity to medical store signboards.

This step was taken because stores were using different nomenclatures, and there was a need to bring in uniformity. The word “pharmacy” is commonly used across the globe, and hence they decided to bring the change.

Chemists and Druggists’ was coined in 1945 but has lost relevance. Also, the word ‘drug’ is looked upon as more clandestine and as an addiction for chemicals, hence not suitable to refer a professional pharmacist.

So what does this change really means?

Since the pharmaceutical industry sells formulations in different dosages and potencies, registered pharmacists no longer compound medicines. In the future, the description “chemists and druggists” will be dropped, and instead, the term pharmacy will be used.

Now that we’ve learned the differences between these three terminologies, it might be helpful to know that while anyone can become a chemist, only medical professionals can become pharmacists.